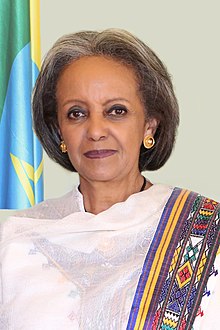 I’ve never been to Ethiopia, a landlocked country in the eastern part of Africa, which became a democratic republic in 1995. I know its capital is Addis Ababa, but I don’t know much else about it, so I was pleased to read that a woman was elected president for the first time in 2018. Sahle-Work Zewde (Sa ⸍lay-Work Zoo⸍day), was appointed then approved by its Parliament when Mulatu Teshome resigned the position unexpectedly. Although the position is ceremonial, it’s a step forward for this male dominated nation and its 121 million people.

Sahle-Work (This is the proper way to refer to her) joins the administration of Prime Minister Abiy Ahmed, who has filled his cabinet with women. Gender equality in Ethiopia is one of Sahle-Work’s goals. In a speech to Parliament when she was approved as president, she said, “If the current change in Ethiopia is headed equally by both men and women, it can sustain its momentum and realize a prosperous Ethiopia free of religious, ethnic and gender discrimination.” Then at her swearing-in ceremony, she said, “I know today I have said a lot about female empowerment but expect me to be even more vocal in the coming years about female rights and equality.” She is expected to serve two six-year terms. She is another rare woman who has been in the political and diplomatic arena throughout her career. She says her father told her that there is nothing a woman can’t do.

Career: (Specific dates and information are difficult to find.)