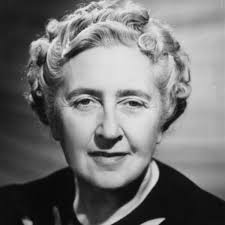 Queen of Crime, Queen of Mystery

Estimates show that Agatha Christie has sold more books of fiction, two to four billion, than any other writer in the world. She is recognized as a mystery maven with Murder on the Orient Express, The Mystery of the Blue Train and dozens more. She also wrote romance novels under the pseudonym Mary Westmacott and wrote short fiction and plays. Movies have been made of her novels.

The Mousetrap, which opened in 1952, is the world’s longest running stage play. Its unbroken run in London theatres has performances scheduled into January 2019. Agatha answered why she decided to be a writer by saying she made up stories as a child and acted out the parts. “There’s nothing like boredom to make you write,” she said.

Dame Christie was born Agatha Mary Clarissa Miller in 1890 in England. She was the youngest of three, and her mother home schooled her. Britain entered World War I in August 1914, and Agatha married Archibald Christie, a pilot with the Royal Flying Corps, in December 1914. He went to war and she took up nursing and dispensed medications, which steered her in the direction of using poison as the murder weapon of choice in her novels.

She published her first book, The Mysterious Affair at Styles, in 1920 about a murdered heiress and introduced Belgian detective, Hercule Poirot.

The couple had a daughter, Rosalind, in 1919, but in 1926 Archie revealed he was having an affair. Agatha was heartbroken and disappeared for nine days. The couple divorced in 1928. Agatha continued her career, and in 1930 introduced detective Miss Jane Marple in The Murder at the Vicarage.  Marple and Poirot are centerpiece characters in many of Christie’s mysteries.

Agatha married archeologist Sir Max Mallowan in 1930, 15 years her junior, and went on several expeditions with him to the Middle East, which accounts for the settings of several of her novels.

The number of her books and credits varies from 67 mystery novels to over 70, depending on which reference is used. Adding her other novels, can come to a total of 80 with 30 short story collections, 15 plays and six romances.