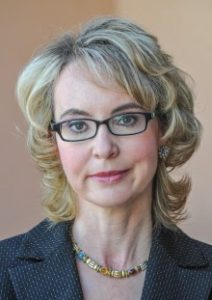 What an honor and rarity to have a Navy ship named for you while you’re still living, which is the case with the USS Gabrielle Giffords. The ship was commissioned June 10, 2017 in Galveston, TX and named after former U.S. Representative from Arizona, Gabrielle “Gabby” Giffords. It is the 10th littoral combat ship in the Navy, the 16th named for a woman and the 13th named after a living person. The littoral combat ship (LCS) is a small surface vessel intended for operations close to shore.

Ms. Giffords survived an assassination attempt January 8, 2011 in Tucson while holding an event for her constituents. The shot to her head at point-blank range left her near death, but she fought back and endured years of therapy and rehabilitation. She resigned her Congressional seat in 2012, having served since 2006, so she could concentrate on her recovery. She had served in the Arizona state senate from 2000-2005, being the youngest woman ever elected to that body.

Ms. Giffords was born in 1970 in Tucson and earned a bachelor’s degree from Scipps College in Claremont, CA and a master’s degree from Cornell University. She worked for Price Waterhouse in New York but returned to Tucson to help in the family’s tire business.

She married astronaut and Navy pilot Mark Kelly in 2007. Kelly was commander of the Space Shuttle Endeavor in May 2011, and Gabby was able to attend the event. Kelly retired from NASA later that year.

The couple co-authored “Gabby: A Story of Courage and Hope” in 2011 and co-founded Americans for Responsible Solutions, an organization that aims to reduce gun violence.

On January 8, 2016, five years after the attack, US News and World Report included an AP quote from Giffords saying, “It’s been a long, hard haul, but I’m getting better,” Giffords said in an email this week. “I wake up every day grateful that I have a second chance at life and a second chance at service.”

Ms. Giffords faced an adversity no woman anticipates in her life, but she has overcome it and has moved forward to continue contributing to society.