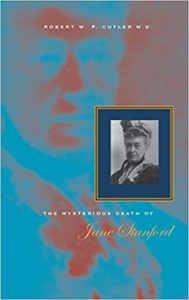 Jane Lathrop Stanford experienced heartbreak and tragedy during her lifetime and had a tragic death.

Born Jane Elizabeth Lathrop in 1828 in Albany, NY, she received an education, part of which was at the Albany Academy for Girls.

She married Leland Stanford in 1850 and the couple moved to Port Washington, WI where Leland set up his law practice. After only two years, a fire destroyed his law firm, so the couple moved back to Albany.

However, the gold rush was underway, so Leland moved to Sacramento to be with his brothers and sell supplies to those seeking gold while Jane stayed unhappily in Albany and cared for her sick father.

When her father died and the couple reunited, they set up their living quarters in Sacramento. The couple prospered with Leland co-founding the Central Pacific Railroad in 1861. He was its president, as well as president of Southern Pacific Railroad, for decades.

Jane became First Lady of California when Leland was elected governor in 1861, but on Inauguration Day, a flood forced the couple to live in San Francisco for four months before settling into a new home in Sacramento. Leland acquired a massive fortune investing in property, horses and grapes. He served as governor until 1863.

When Jane was 39 and already married for nearly 18 years, she gave birth to Leland DeWitt Stanford in 1868. The boy later requested he be called Leland Stanford, Jr. The Central Pacific Railroad moved its offices to San Francisco in 1869, so the couple moved there and built a mansion on Nob Hill.

Leland Junior dreamed of having a museum in San Francisco comprised of historical objects he collected during the family’s travels. But tragedy struck during the family’s vacation to Italy. Junior contracted typhoid fever and died March 13, 1884, just before his 16th birthday.

The couple grieved terribly and wanted to immortalize their son and decided to found a university. Thus Stanford University, officially Leland Stanford Junior University, opened on Oct. 1, 1891 in Palo Alto, CA. Leland Senior died in 1893 and his assets were frozen, but Jane was determined to keep the university open. She used her own possessions to keep it running, and when claims against the estates were rejected and the assets released in 1898, she was able to develop Stanford University further with construction of several building. In 1903 she turned over the reins to a board of trustees but remained its president and an integral part of running the university.

In January 1905 she experienced a shock to learn that mineral water she had drunk contained strychnine. She had decided to travel extensively and arrived in Oahu on Feb. 15, 1905. On Feb. 28 she was seized with spasms and despite doctors attempts to revive her, she died in the Moana Hotel at age 76.

Analysis of the bicarbonate of soda she had drunk was laced with strychnine. No one has ever been prosecuted for the death. The bulk of her estate was left to Stanford University.