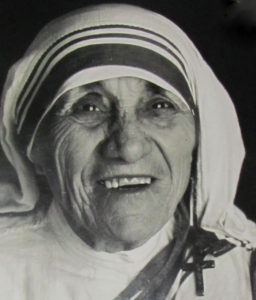 Founder of Missionaries of Charity

A picture recognized around the world is that of Mother Teresa. Born Agnes Gonxha Bojaxhiu in 1910 in Skopje, Macedonia, this tiny woman went on to minister to the poorest and sickest people on earth. She explained that she had a calling to this ministry. In the process she relinquished all concern for herself, dedicated her efforts to the sick and poor and had total faith that God would guide her.

One element that is consistent when reading about Mother Teresa is how she inspired and influenced those who met her and worked with her. One of those people is Maryanne Raphael, who wrote “What Mother Teresa Taught Me.” The book gives an account of the nun’s life and works and tells of the influence she had around the world, specifically how she influenced Raphael’s life.

Raphael gained a new perspective when she developed a brain tumor. She remembered Mother Teresa’s words: “Everything is a gift from God. We must give him thanks.” Simply stated, Raphael says, “She taught me to stop worrying and to trust God.” Raphael tells of how after the operation, the doctors told her she made a miraculous recovery.

Reading how Mother Teresa established the Missionaries of Charity and her determination to assist those with no resources is inspirational. People around the world recognized her monumental achievements, and as a result, she received a multitude of awards including the Nobel Peace Prize in 1979.

Mother Teresa died in 1997 and was elevated to sainthood in the Catholic Church on Sept. 4, 2016. She is now called Saint Teresa of Kolkata.

More about Saint Teresa of Kolkata is at:

“What Mother Teresa Taught Me” by Maryanne Raphael