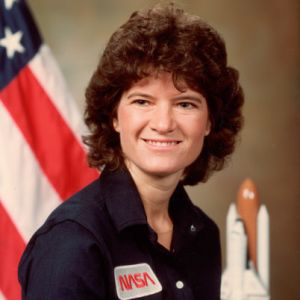 In January 1978, NASA chose six women to be astronaut candidates, and Sally Ride was one of them. She was dedicated to science, especially encouraging young children to learn more about the subject.

Born in 1951 in Los Angeles, Sally was athletic and favored tennis, eventually being ranked 18th on the national junior tennis circuit. She entered the physics program at Swarthmore College in PA but left to concentrate on improving her tennis game. Tennis Pro Billie Jean King told her she could make tennis a career, but Sally decided against it. She has said that physics had a more lasting career than tennis.

She enrolled at Stanford University where she earned a bachelor’s degree in both English and physics. That followed with a master’s degree in science and Ph.D. in physics, both from Stanford.

On June 18, 1983, when the space shuttle Challenger was launched from the Kennedy Space Center in Florida, Sally was on it as mission specialist. It was the first five-person crew, and Sally was the first woman along with four men. At 31 years old, she was the youngest astronaut on a NASA mission.

The shuttle returned on June 24, and Sally was to follow that with the Oct. 5-13, 1984 Challenger mission. Her third flight was cancelled after the Challenger midair explosion disaster in January 1986.

Sally left NASA in 1987 and taught physics at University of California at San Diego and was director of the California Space Institute. Her priority remained at having young children, especially girls, become interested in science. She developed the Sally Ride EarthKAM program, which is Earth Knowledge Acquired by Middle school students. This NASA sponsored program allows middle school students from around the world to control a camera on the International Space Station and take pictures of the earth.

Sally married astronaut Steven Hawley in 1982, but they divorced in 1987. In her obituary, she revealed that she was gay and had a 27-year relationship with Tam O’Shaughnessy, a tennis player and professor. She and Tam co-wrote seven science books for children. The pair also founded Sally Ride Science, a nonprofit organization at UC San Diego. It promotes STEM – science, technology, engineering, math – and encourages young people to pursue these fields.