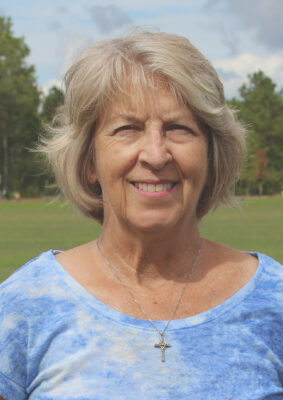 “Never,” Deb Boyce says when asked if she ever missed voting in any election, whether local, state, or national.  “I always try and vote my conscience and my heart,” she says. “I like to vote for what the person stands for rather than the party.”
Boyce couldn’t vote in a national election until 1972 because the Twenty-Sixth Amendment to the Constitution, which lowered the voting age from twenty-one years to eighteen years, wasn’t ratified until 1971.

Boyce had an interest in working at the polls for years, but jobs, family, and involvement in other volunteer activities didn’t allow the time. After she retired from her position at the Museum of Coastal Carolina in Ocean Isle Beach, North Carolina, she believed she had time to do more for the community. She took the needed training to be a precinct official and in 2017 began working at her precinct in Brunswick County, North Carolina.

Sara Knotts, director of the Brunswick County Board of Elections, says the average training time is three hours, and precinct officials have various roles, such as chief judge, judge, and assistant. Judges and assistants may serve a variety of functions: ballot coordinator, machine technician, official in charge of provisional and curbside voting, greeter, floater, and roles at the check-in station.

“No matter what questions are asked, I answer with a smile and answer to the best of my ability,” Boyce says. “I’m always there with a smile and being upbeat.” She never tells people she can’t help them. If she doesn’t know the answer to a voter’s question, she consults the chief judge at the precinct for assistance. If the answer eludes them, they call the Board of Elections. “We do everything we possibly can to answer each and every question. We try not to turn voters away and tell them they can’t vote,” Boyce says.

In Boyce’s experience, the most frequent mistake a voter makes is arriving at the wrong precinct on Election Day. Early voting allows voters to cast their ballots at any precinct in the county, but that’s not the case on the day of the election. Boyce says voters often can’t understand the reason for this regulation.

Knotts says people can’t vote outside their precinct because that’s the way the law is written.

Boyce assists in making sure voters know where their home precinct is and makes sure they have time to reach it. If there isn’t time, she offers a provisional ballot. She explains that a provisional ballot is sent to the Board of Elections and reviewed there. The Board then decides whether it can be counted.

Knotts says a provisional ballot may not be counted if the voter:

“I’ve never had a bad experience,” Boyce says. “The reason we’re there is to help the public.”

She recommends those interested in being precinct officials contact the Board of Elections in their county either by phone or online. Training is required before every election because state and federal regulations change, and poll workers need to understand those changes.

Boyce is an avid volunteer and received commendation for her twenty-year involvement with the Brunswick County Turtle Patrol, seven years as its coordinator. In this capacity she set up schedules and helped protect nests and turtles on the beach.

For fifteen years she was also a volunteer with the North Carolina Oyster Festival, which is organized by the Brunswick County Chamber of Commerce. For five of those years she was chair of the Festival.

Boyce has a personal philosophy she lives by: “I always try and put my best foot forward and think of others before myself,” she says. “I try and do what’s right. It may not always be the most popular avenue to take. I try to be fair with everybody I come in contact with no matter the situation.”