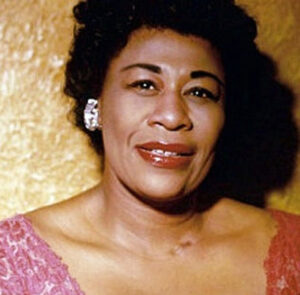 Ella Fitzgerald dreamed of being a dancer and in 1934 entered an amateur contest at the Apollo Theater in Harlem, but the main show featured dancers, and Fitzgerald felt she couldn’t compete against them. Instead she switched to singing Hoagy Carmichael’s “Judy” and “The Object of My Affection” and won first prize, $25.

She became popular in the 40s, recording songs, starring in movies and performing with well-known entertainers. She developed the art of scat, the improvisational singing of nonsense syllables instead of words, and is regarded as one of the best scat singers ever.

Fitzgerald was born April 25, 1917 in Newport News, Virginia, the daughter of common-law partners. Her parents separated shortly after her birth, and her mother took her to Yonkers, New York where they lived with her mother’s boyfriend. In 1923 her mother had another daughter, and to help financially, little Ella worked as a messenger “running numbers” and being a lookout for a brothel.

Her mother died in 1932, and Fitzgerald moved in with an aunt. She was sent to reform school because of her absences, but within two years she was living on the streets, but her mind set didn’t change drastically after her Apollo win. She married Ben Kornegay, a convicted drug dealer, in 1941 but had the marriage annulled. In 1947 she married Ray Brown, and the couple adopted the son of Fitzgerald’s half-sister, but the couple divorced in 1952.

In the 80s Fitzgerald developed health issues, including diabetes, which affected her eyesight. In the mid-90s both her legs were amputated below the knees. She died June 15, 1996, in Beverly Hills at the age of 79.

I featured Fitzgerald in my ebook, Women and Adversity: Honoring 23 Black Women, available at amazon.com and barnesandnoble.com.