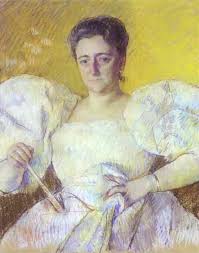 Socialite and art collector Louisine Havemeyer understood she’d probably be arrested and jailed if she participated in the suffrage demonstration in front of the White House on February 9, 1919. A group planned to burn in effigy a paper cutout of President Woodrow Wilson. Other women had been arrested and jailed for their demonstrations, but Havemeyer at 63 years old believed she had to do her part in supporting the suffragists.

She led the march to the White House and gave an impassioned speech. When she attempted to light the effigy, the police handcuffed and arrested her with 39 other women. Her family was horrified at the headlines announcing the arrests and jailings and sent her telegrams urging her to post bail. She didn’t and spent five days in jail. Havemeyer later wrote, “From them I gleaned I had stripped the family tree, broken its branches, torn up its roots and laid it prostrate in the dust.”

Louisine Waldron Elder was born July 28, 1855 in New York City to a prominent family, the second of four children. As a teen, she studied French at the prestigious Mme. Marie Del Sarte boarding school in Paris and met Mary Cassatt, the impressionist artist. She then became enthralled with art and admired the paintings by impressionists.

After the death of her husband in 1907, Havemeyer became so depressed she considered suicide, but her daughter Electra encouraged her to participate in the suffragist movement. She then:

She remained friends with Cassatt and contacted her to help plan an art show featuring Cassatt’s works along with those of fellow impressionist Edgar Degas. Cassatt agreed if Havemeyer donated proceeds to the suffrage movement. Havemeyer held the exhibit in 1915 at the M. Knoedler & Company art gallery in New York City.

Havemeyer died January 6, 1929 at the age of 73. The Metropolitan Museum of Art in New York City received almost two thousand pieces of her art collection, including works by Cassatt, Degas, and Rembrandt. I feature Havemeyer in my ebook: Women and Adversity, Saluting 23 Faithful Suffragists, available at online venues.