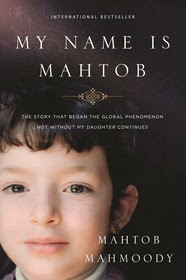 Mahtob Mahmoody became known in 1987 when her mother, Betty Mahmoody, along with William Hoffer published “Not Without my Daughter.” The book tells of the 18 months the two were captives in Iran. Mahtob’s father, Dr. Bozorg Sayyed Mahmoody, had convinced Betty to visit Iran for two weeks to meet his family, but once there, he told her she was never leaving that country. Mahtob was four years old. The movie of the same name starring Sally Field came out in 1991.

Mahtob, now 36, has written her own book, “My Name is Mahtob,” in which she recounts the horrors she experienced as a child in Iran, the escape with her mother to Turkey, the results of her captivity and her life back in America. Her book, as well as her mother’s, mesmerizes the reader because her experiences go beyond what most American women encounter or believe can happen.

This Chasing the Frog link answers a multitude of questions surrounding the ordeal of Betty and Mahtob: