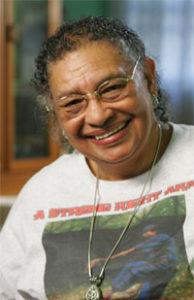 Mamie Belton Johnson is the essence of what I want to achieve in this blog, showing adversity women have experienced. She loved playing baseball, having played the sport with the boys from the time she was six years old. Pitching was her specialty, but in 1952 she was denied a spot in the All-American Girls Professional Baseball League because she was black.

Mamie was born Sept. 27, 1935 in Ridgeway, SC. Her parents separated, and her mother moved to Washington, DC and became a dietician while Mamie lived with her maternal grandmother, who encouraged Mamie’s love of baseball.

When her grandmother died, Mamie was 10 and moved to New Jersey to live with relatives. She tried girls’ softball, but it wasn’t challenging enough for her. The Long Branch Police Athletic Club, an all-white boys’ team, accepted her, and she was the only girl and only black on the team. She helped carry the team to two division championships.

Two years later she moved to DC to live with her mother and began playing semi-pro baseball for two black male teams, the Alexandria All-Stars and St. Cyprian’s.

In 1952 she married Charles Johnson and the couple had a son, Charles Johnson, Jr. In 1953 a scout for the Indianapolis Clowns, a team in the National Negro Professional Baseball Leagues, saw her pitch. She was invited to try out for the team and was hired. Toni Smith was already on the team and in 1954 Connie Morgan was added.

One opposing player called Mamie “Peanut” because she was so small, 5’3” and about 98 pounds. She is quoted as saying, “I struck him out, and the name stuck.” Mamie played for three seasons from 1953-55 with a record of 33-8 as a pitcher with a batting average of .270.

She went on to coach youth league baseball teams, earned her license as a practical nurse from North Carolina A&T State University and worked at Sibley Hospital in DC for decades before retiring in 1995.

In an interview in 2010, she said, looking back, she was glad the girls’ professional league didn’t let her play. “If I would have played with the women, I would have missed out on the opportunity that I received, and I would have just been another player. But now, I’ve done something that makes me stand out a little bit.”

Bob Kendrick, president of the Negro Leagues Baseball Museum in Kansas City, MO is quoted in the obituary of The State newspaper in Columbia, SC, as saying, “We lost a voice with her passing, but her legacy plays on at the Negro Leagues Museum. Hers is a story of hope, a story of perseverance and an example of how to overcome adversity and achieve your dreams.”