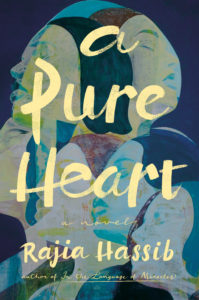 Part I of this blog appeared March 26. In it Rajia Hassib tells of returning to school and the stresses she experienced writing In the Language of Miracles.

JAM: What was the biggest obstacle you faced when you were writing [your second novel] A Pure Heart?

RH: A Pure Heart presented a different challenge. By then, I had finished my MA, was writing full time at home, and my kids were older and both in school, which meant I had more time. Having one novel under my belt also meant that I was less skeptical of my language skills, which allowed me to tackle writing with a bit more confidence.

But a second novel is a totally different beast. I had lost the support of the brilliant and kind professors making up my thesis committee, who had offered me guidance and encouragement along every step of writing the first novel. I’m still blessed to have the support of my mentor, who was the head of my thesis committee and who reads every draft of everything I write and gives me thoughtful, considerate feedback, but I had to first come up with a full draft before I could share it with her, and I often doubted if I was able to do this on my own.

That doubt was complicated by the fact that A Pure Heart was technically and structurally more challenging with a complex plot and covering a long span of time. In addition to that, a second novel presents a specific challenge: since my first one had been published and, thankfully, critically well-received, I constantly feared that my second one would never be as good. With all of this in mind, I would say the biggest obstacle I faced when writing A Pure Heart was finding the courage to keep trying even after writing multiple bad drafts and despite near-constant self-doubt.

RH: I still struggle with time management, particularly developing the ability to shut out stress and distractions and to focus. My kids are now in college and high school, and I’m learning that motherhood and stress maintain an intimate relationship that changes in nature as the kids grow older, but that doesn’t seem to fade away. And life, in general, often makes focusing on writing harder, as we all face the different daily obligations and pleasures from work commitments to household chores to illnesses to time spent with family and friends.

Writing, for me, requires a clear mind, but I’ve come to accept that I don’t need large intervals of clarity, only consistent smaller bursts of it. I’m trying to learn that I don’t need a full day to write. I only need a couple of hours each day. And if I can’t do it every day, that’s fine, too, because the time between writing sessions is often time I spend thinking about the characters and plot, and I find that coming back to writing after a pause of a day or two often results in a productive writing session, since I end up using all the material I thought about in the intervening time.

So I’m trying to develop a delicate balance of productivity: making sure I do get in enough hours of writing each week, but also not stressing too much if I skip a day or two in the process. At the end of the day, I believe persistence is the key to finishing a novel, and I’m working hard at maintaining a steady pace, even if it’s slower than what I would have liked it to be.