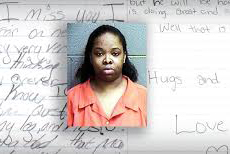 Shortly after bringing her 20-month-old son to the hospital after noticing his leg was swollen, Tondalo Hall was arrested. She is now serving a 30-year sentence in Oklahoma, for allegedly “enabling” the abuse of her son and 3-month-old daughter at the hands of then-boyfriend, Robert Braxton Jr.

Tondalo applied for a commutation, which is a special kind of clemency. She could be released if enough people sign a petition requesting it.

Clicking on this link takes you to the petition and further explanation.