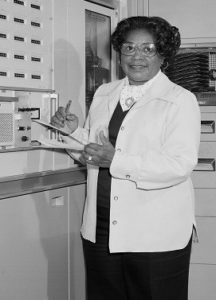 Mary Winston grew up in Hampton, VA and attended all-black schools, graduating from George P. Phenix Training School in 1937.  She received her Bachelor of Science degree in mathematics and in physical science from Hampton Institute in 1942.

For a year she taught math in Maryland but returned to Hampton and held a series of jobs. About 1945 she married Levi Jackson, Sr., and they had two children, Levi, Jr. and Carolyn. Mary was active in the community and was a Girl Scout leader for more than 20 years.

In 1951 she joined NACA (See my blogs from Sept. 14 and Aug. 24) as a “computer” with the all-black West Area Computing section, reporting to Dorothy Vaughan, supervisor of the group. Her job was to extract the relevant data from experiments and flight tests.

After two years in the computing pool, engineer Kazimierz Czarnecki offered Mary an opportunity to work in the Supersonic Pressure Tunnel conducting experiments. He then suggested she get training to go from mathematician to engineer.

The problem was that she would have to take graduate level courses in mathematics and physics, but the classes met at segregated Hampton High School, and she needed special permission from the city to attend them and be in class with white students. She appeared before a judge and pled her case, which the judge granted. She completed the courses, received a promotion, and in 1958 she became the first African American woman engineer at NASA.

She was concerned about discrimination against women and minorities and worked to help women earn promotions and change their designation from “mathematician” to “engineer.” She herself was denied management positions, so in 1979 she left her engineering post and took an administrative position as an equal opportunity specialist, even though it was a cut in pay. She was successful in bringing attention to the situation, which furthered recognition for women’s achievements.

She retired from NASA in 1985 after 34 years. She died in 2005 at Riverside Convalescent Home in Hampton, VA.

The 2016 film, Hidden Figures, features her achievements along with Dorothy Vaughan’s and Katherine Johnson’s. (See my July 27 blog about Katherine, and my Sept. 14 blog about Dorothy.)